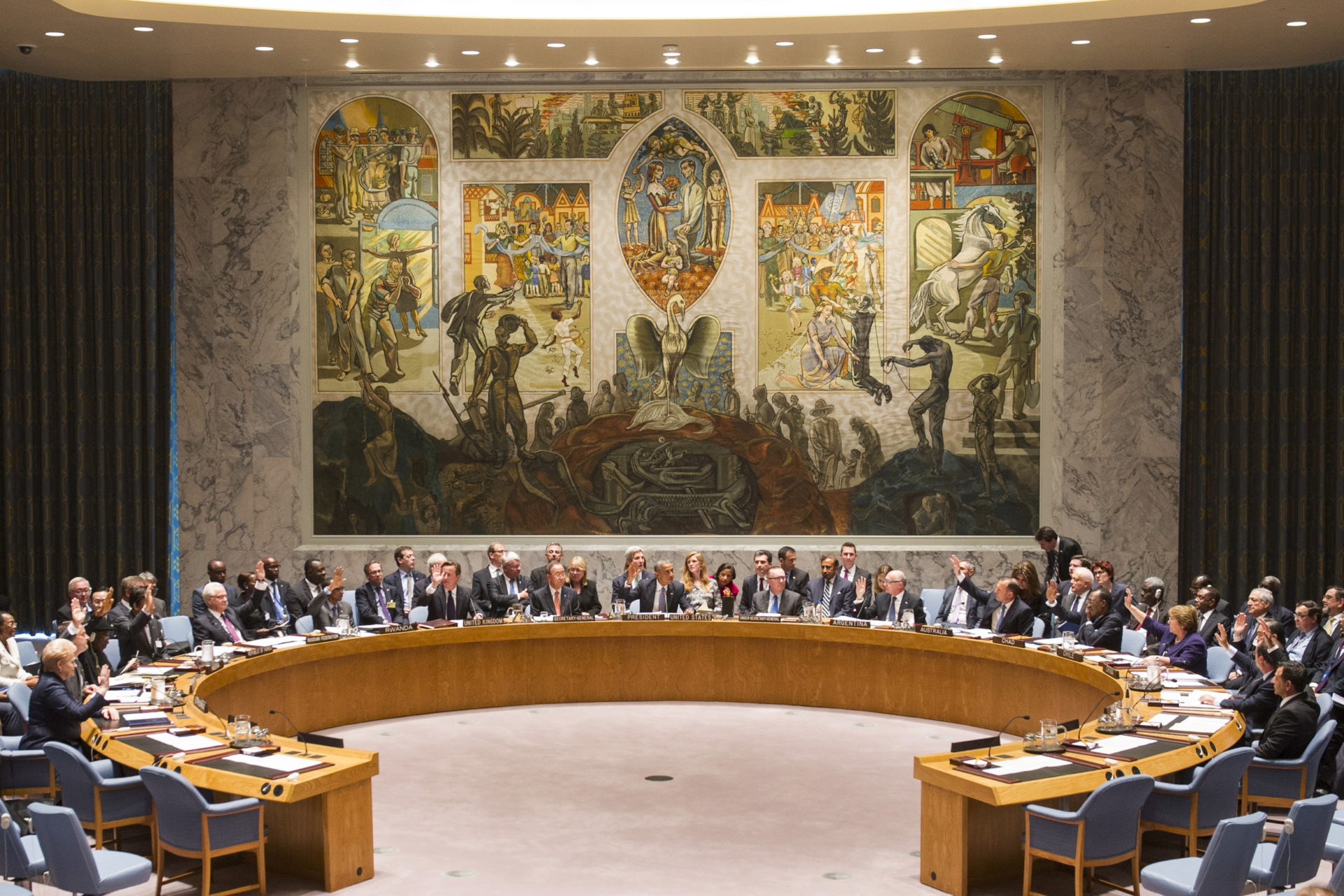 In this article, we will recall the attempts of the international community to define “terrorism” over the years and consider the factors that complicate forming a coherent definition which is universally accepted. We will illustrate what actions and motivations constitute terrorism, who is a terrorist rather than a freedom fighter, and who holds the right to define terrorism. Lastly, we will discuss whether there should be any more attempts in the future to reach a mutual consensus over the definition of terrorism.

The first attempt to define terrorism in international law occurred in 1937 after ethnic separatists assassinated the Yugoslavian King and the French Foreign Minister.2Blocher, Danja. “Terrorism as an International Crime: The Definitional Problem.” Eyes on the International Criminal Court, vol. 8, no. 1, 2011, pp. 107–138 The Convention for the Prevention and Punishment of Terrorism was drafted by the League of Nations, which described acts of terrorism as “criminal acts directed against a State and intended or calculated to create a state of terror in the minds of particular persons, or a group of persons or the general public.”3Young, Reuven. “Defining Terrorism: The Evolution of Terrorism as a Legal Concept in International Law and Its Influence on Definitions in Domestic Legislation.” Boston College International and Comparative Law Review, 2006. States were required to incorporate legislation criminalizing terrorism in accordance with the treaty. The convention was only signed by twenty-four states, ratified by one, and it never entered into force.4Ibid.

“Criminal acts intended or calculated to provoke a state of terror in the general public, a group of persons or particular persons for political purposes are in any circumstance unjustifiable, whatever the considerations of a political, philosophical, ideological, racial, ethnic, religious or any other nature that may be invoked to justify them”.5United Nations General Assembly (December 9, 1994). “49/60: Measures to Eliminate International Terrorism”. UN Doc. A/Res/60/49.

A particular strength of this resolution is that it was accepted by consensus and not by vote, allowing it to enjoy a high level of legitimacy as an outcome of a fully representational forum of the General Assembly.6KKIENERM. “Counter-Terrorism Module 4 Key Issues: Defining Terrorism.” Unodc.org, 2020. However, as a resolution of the General Assembly, it is not binding on states. This means that states may keep this definition in mind when drafting their domestic legislation but are not under an obligation to do so.

After the 9/11 attacks, the Security Council adopted Resolution 1373 (2001), urging states to take domestic legislative action against terrorism. It refers to terrorism as:

“criminal acts, including against civilians, committed with intent to cause death or serious bodily injury, or taking of hostages, with the purpose to provoke a state of terror in the general public or in a group of persons or particular persons, intimidate a population or compel a government or an international organization to do or to abstain from doing any act, which constitute offences within the scope of and as defined in the international conventions and protocols relating to terrorism, are under no circumstances justifiable by considerations of a political, philosophical, ideological, racial, ethnic, religious or other similar nature, and calls upon all States to prevent such acts and, if not prevented, to ensure that such acts are punished by penalties consistent with their grave nature”.7UN Security Council Resolution 1373, U.N. Doc.S/RES/1373 (28 Sep. 2001).

The resolution provided a guideline for countries to establish effective national legislative action as part of their global efforts to counter-terrorism. As it is a resolution of the Security Council, it is binding on states.8KKIENERM. “Counter-Terrorism Module 4 Key Issues: Defining Terrorism.” Unodc.org, 2020. However, in the absence of a singular universally agreed definition of terrorism, states had mixed legislative responses with the potential to ignore important points of the resolution. Most importantly, none of the attempts encapsulate instances of state-sponsored violence, either within or outside its nation-state, that may fall under the umbrella of terrorism.

Why is Terrorism Difficult to Define?

Formulating an effective definition of terrorism is a complicated process. One important hurdle is to make sure definitions avoid over-simplification. Definitions that pose an increasing emphasis on violence as the only possible outcome of an act of terror are limited in utility and over-simplify the vast scope of terrorist activities.9Sinai, Joshua. “How to Define Terrorism.” Feb. 2008. Such definitions ignore other critical variables of terrorism that fall below the threshold of violence, such as mobilizing support among a group’s radical subculture, providing social welfare services to terrorist groups, and even maintaining internet-based websites for circulating sensitive information to be used for future criminal activities, which can be used as evidence against persons under trial for terrorism.10Ibid.

Similarly, definitions that are fixated on defining terrorism through “political, ethnic, racial, religious, or ideological motivations” are extremely narrow in scope and fail to acknowledge terrorist activities that may not function under the stated motivations.11Orehek E, and Nieuwenhuis A, “Understanding The Terrorist Threat: Policy Implications Of A Motivational Account Of Terrorism.” 2022. Although United Nations General Assembly Resolution 49/60 clarifies certain acts as a terrorist in nature regardless of such motivations,12United Nations General Assembly (December 9, 1994). “49/60: Measures to Eliminate International Terrorism”. UN Doc. A/Res/60/49. the domestic anti-terrorism legislation of USA, Canada, and UK continue to rely on motivating factors to distinguish terrorist activities from other crimes.13Stuurman, Ziyanda. “Terrorism as Controversy: The Shifting Definition of Terrorism in State Politics.” 24 Sept. 2019.

Definitions of terrorism must also consider whether the targets of terror attacks are “noncombatants”, as in civilians, or whether terrorism can be used by sub-national groups against all citizens, including civilians and armed members of the military.14Sinai, Joshua. “How to Define Terrorism.” Feb. 2008. If terrorist attacks are only those conducted against “noncombatants”, then attacks against the military in an armed conflict are not, by their nature, terrorist. This creates a larger issue of distinguishing between groups that use terrorist tactics to attack state militaries, civilians, or both.

Who is a Terrorist?

A terrorist would make use of violence as a means and method of warfare and target civilians or unarmed military personnel. A freedom fighter would aim to fight the state military in opposition to social, economic, political, and ideological oppression by imperialist states. However, as previously mentioned, these distinctions are difficult to make when national liberation movements result in guerrilla warfare. Certain guerrilla groups that are terrorist in nature make use of attacks against both civilians and military personnel to instigate state response, which can further complicate defining the activities of a terrorist organization.15Ibid.

Some scholars argue that guerrilla wars make use of increased violence, periodic terrorist attacks, and attacks not limited to combatants so that the liberators maintain the element of “surprise” in combat.16Ganor, Boaz (2002). Defining Terrorism: Is One Man’s Terrorist another Man’s Freedom Fighter?. Police Practice and Research, 3(4), 287–304. Others argue that guerrilla fighters, to a certain extent, function under the laws laid down by International Humanitarian Law, which is completely beyond the intentions of terrorist organizations.17Ibid. Since no unanimously accepted international legislation creates a distinction between the two, there is no difference in punishment that may discourage guerrilla fighters from attacking civilians and concentrating on engagement with the state military instead.18Ibid. Therefore, a comprehensive definition of terrorism is necessary to establish clear boundaries between the activities of terrorists and those of armed national liberation movements.

Why is a Singular Definition of Terrorism Difficult to Agree Upon?

Naturally, the distinction between terrorist activities and the activities of national liberation movements forms an important point of contention between states when agreeing upon a universal definition of terrorism. For example, after the ad hoc committee of General Assembly resolution 51/210 presented detailed legislation on terrorism in 2002, members of the Organization of Islamic Council (OIC) tried to exclude from the definition of terrorism those people who were engaged in a fight for self-determination.19Blocher, Danja. “Terrorism as an International Crime: The Definitional Problem.” Eyeson the ICC, vol. 8, no. 1, 2011-2012, pp. 107-138. Article 2 of the Arab Convention for the Suppression of Terrorism states “The activities of armed forces during an armed conflict, as those terms are understood under international humanitarian law, which are governed by that law, are not governed by this Convention”.20Ibid.

Should International Bodies Continue Efforts to Create a Singular Definition of Terrorism?

Despite years of effort, international bodies like the United Nations have failed to unite states around the world in agreeing upon a singular definition of terrorism. Continued efforts are necessary to avoid problems that can arise from a lack of consensus. The absence of a binding definition can facilitate the politicization and the misuse of the term terrorism. Even though UN General Assembly resolution 49/60 explicitly states that no political motive can justify acts of terrorism, in the absence of a universally accepted definition by nation-states, the resolution does not incriminate a state for its counter-terrorism activities that may have violated provisions of IHL or constituted as acts of terror on multiple occasions.

Without an agreed comprehensive definition of terrorism and a terrorist, there is an increasing chance of violating the legal principle of “nullum crimen, nulla poena sine lege” which implies that crimes cannot be taken to trial if no law existed at the time the crime occurred.23KKIENERM. “Counter-Terrorism Module 4 Key Issues: Defining Terrorism.” Unodc.org, 2020 If the criminal nature of terrorism is not defined in such a way that it can facilitate international courts before a complicated instance of terrorist attack occurs, and domestic laws are not comprehensive enough to cover that particular act of terror, it is likely that existing international legal framework may not be able to carry out necessary judicial procedures to punish terrorists.

A universally agreed definition of terrorism would enable the international community to operationalize legislative tools to combat terrorism more effectively. It will allow for specific punishments against those encouraging, involved in, or supporting terrorism, and will allow the formulation of international conventions against terrorism, terrorist organizations, states sponsoring terrorism, and economic firms trading with them.24Ganor, Boaz (2002). Defining Terrorism: Is One Man’s Terrorist another Man’s Freedom Fighter?. Police Practice and Research, 3(4), 287–304.

We face an essential need to reach a universally agreed upon definition of terrorism which would allow for clarity in the law as well as for those which it seeks to impugn. The best course of action to protect the security interests of all states from future acts of terror, as well as the misuse of the term, lies in the formation of a singular universally agreed definition of terrorism. As a result, it would be safe to argue that continued effort in the right direction is not only required, but also necessary.

The writer is a senior year student studying economics and politics at LUMS.